How to Install Rails 7.0 on Windows (without WSL)

This guide is aimed at programming beginners who want to work with Ruby and Rails. If you’re a power user, skip to the end for the TL;DR section.

It assumes you’re on Windows 10 and have nothing pre-installed to work with Ruby and/or Rails, so this guide starts from scratch.

Go to the start menu and open Windows PowerShell. It could also say (x86) at the end, but be sure not to select the ISE entry. 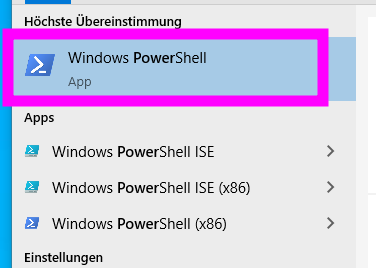 Now we check whether the winget package manager is already installed. For this, type winget into the PowerShell windows and hit Enter:

This probably looks like the image above. It prints out red text that tells you that winget is not installed, so let’s install that first.

and hit Enter to close the PowerShell window now. If it does not show red text, but instead information about winget, then winget is already installed. In that case you can skip the installation and go directly installing packages.

To install winget, we have to go to the pre-installed Microsoft Store.

There we need to install the App Installer by Microsoft. 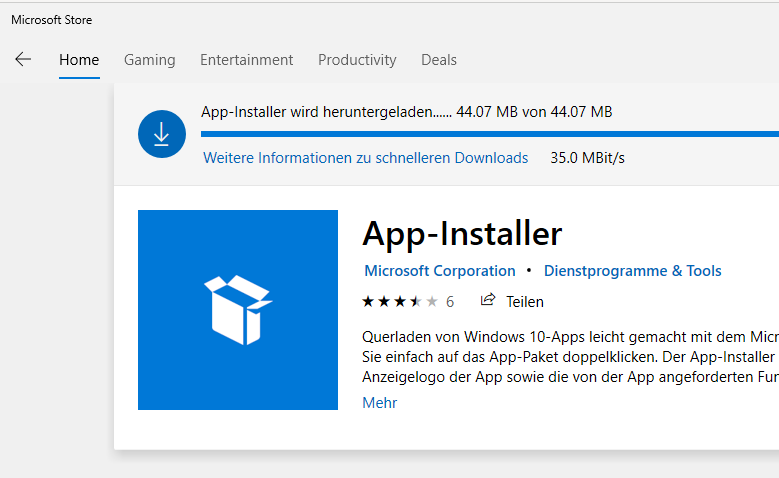 By clicking the link, you should see a website that allows you to install the App Installer directly in the Microsoft Store. If it is already installed, make sure that you install the latest update before you continue.

Close the previous PowerShell window if it is still open.

Since you closed the previous PowerShell window, open a new window via the start menu.

Now enter the winget command and hit Enter. You should see the following output: 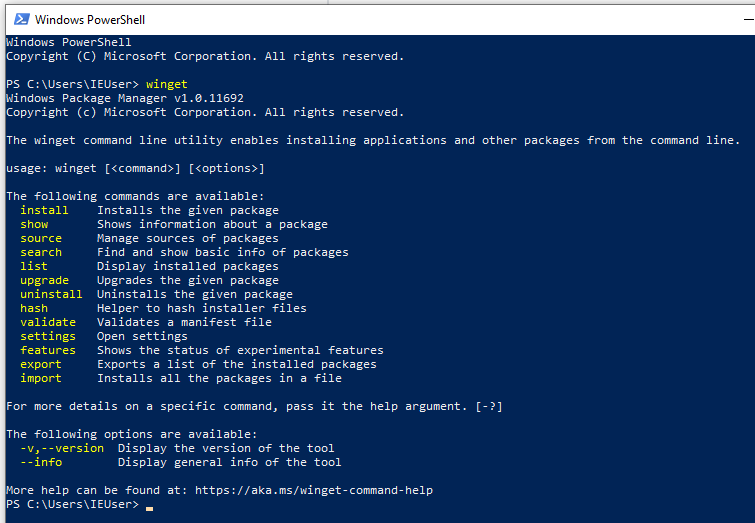 Copy and paste the following into PowerShell and hit Enter:

You might get asked to accept the “msstore” source, which is the default Microsoft installation source. Type in “Y” and hit enter.

This will take a few minutes to install the packages. Small installation windows will pop up during this process and you’ll be asked to allow the installation of these packages like with any other installation. At the end it should look like this: 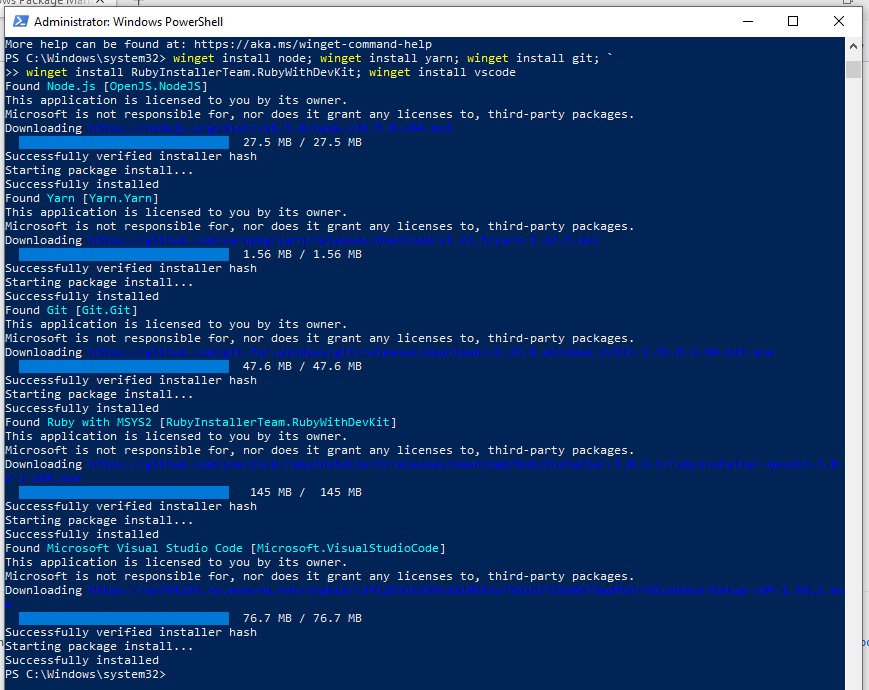 Now type in exit (followed by Enter) to close the PowerShell window and re-open it again. Then enter the commands you see below:

All four commands should print out a version similar to the one seen here.

Now type in exit (followed by Enter) to close the PowerShell window, as we have done before.

Now go to the Start menu and choose the “Start Command Prompt with Ruby”: 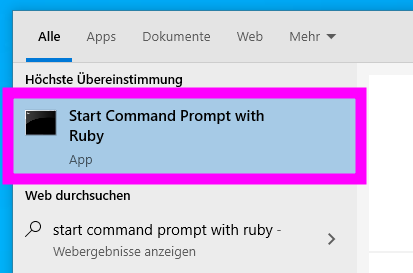 Enter this and hint enter:

This will take a while and will show a lot of colorful output. At the end it should look like this:

After the installation succeeded, we can type exit (followed by Enter) to close this window.

In the file explorer, create a folder called “rails” in your home folder. You can also give it a different name, but we will use “rails” here.

cd here stands for “change directory”, we told PowerShell to navigate to this directory.

Copy and paste this into PowerShell and hit Enter:

This might take a minute, it will print out a few lines, at the end it should say “1 gem installed”.

Hint: at the time of writing this (December 2021), 7.0 was the lastest version. You might also want to just try `gem install rails --no-doc` and install the latest version.

This will produce a lot of output and install all of the rails dependencies. The second to last line should be “Successfully installed rails” including the Rails version number.

This also takes a few minutes, most probably longer than installing the packages. At the end, it should look like this: 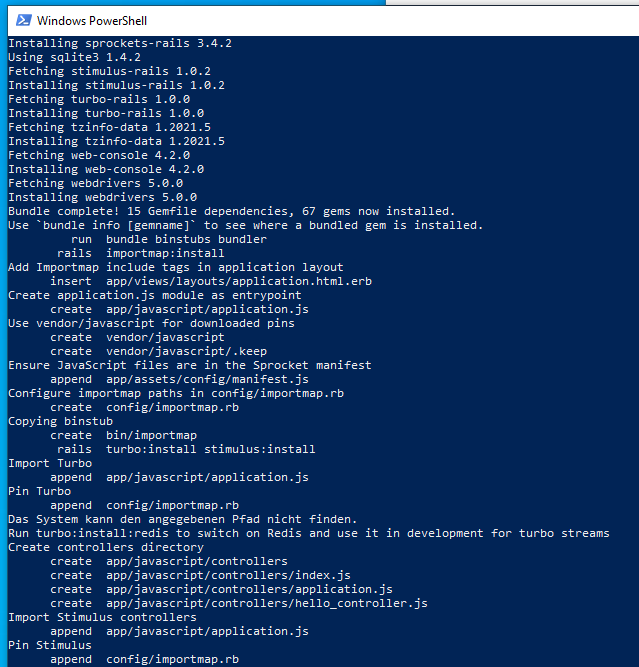 If you see this, Rails has been successfully installed. We also created a small Rails application called myapp.

You can now change to this app and start the Rails server:

You should copy and paste both commands and hit Enter for both. 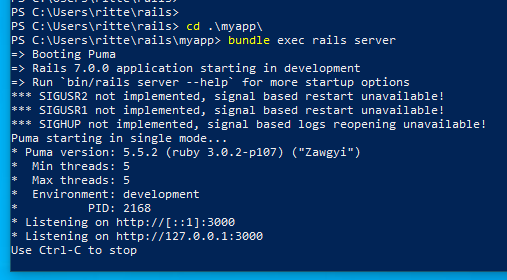 This means the Rails server was started successfully. You can follow the instructions and open your Rails app in the browser by going to http://localhost:3000. You should see this: 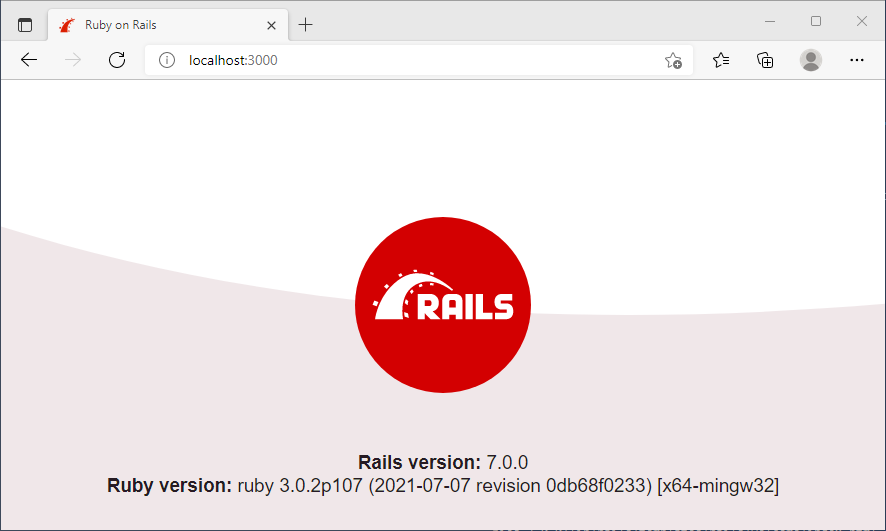 Congratulations! You successfully installed Rails and created your first app.

To comfortably work with your Rails project, I recommend to install an editor. A popular editor is VS Code. You can install it via PowerShell:

After this, close and re-open the PowerShell window, navigate again to your rails folder, then to your myapp folder like we did in “Starting the Rails server”, then enter:

Now VS Code starts and opens your myapp project. You’re now ready to work on your app.

I hope this guide was helpful to you. Reach out via Twitter if you liked it and/or if you had any issues with it. Feel free to share it. Cheers!

For power users, the short summary: